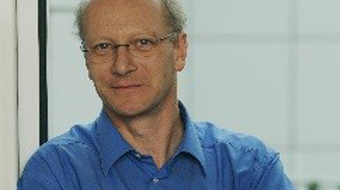 Hans-Jürgen Butt studied physics at the Universities of Hamburg and Göttingen. He re­ceived his Diploma in 1986. Then he moved to Frankfurt to work in Ernst Bamberg’s group at the Max Planck Institute for Biophysics on light induced proton transport of bacteriorhodopsin. After his PhD in 1989 as a postdoc in Santa Barbara with Paul Hansma he got into contact with the newly developed atomic force microscope. From 1990-96 back in Frankfurt as a researcher he studied biological objects with the atomic force microscope. In this period the work on surfaces in particular on surface forces became a central issue. In 1996 he went to the institute for physical chemistry at the Johannes Gutenberg-University in Mainz as associate professor. There he focussed on the physics and chemistry of interfaces. Three years later he joined the University of Siegen as full professor for physical chemistry. In 2002 he followed a call to the Max Planck Institute for Polymer Research in Mainz, where he is a director. His work focuses on the experimental physics of interfaces.

All session by Hans-Jürgen Butt